There are 2 kinds of affection in The Seven Deadly Sins: Grand Cross, which are Hero Affinity and Character Affection.

Increasing the affection of the Heroes in the game will give you free Diamonds, free Cosmetics, artworks, animations, and other interesting stuff! 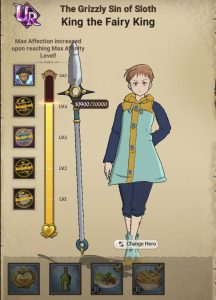 Each hero has a specific affinity meter. Depending on the Hero rarity, the number of points to max out the affinity tree varies:

Each affinity tree has 5 levels in total and every time you get to a new level, it takes even more points to get to the next level. It takes just a little amount of points to reach level 1, but will cost you a ton of affinity point to reach level 5!

To increase the Hero affection, you can either give them

Vanya Ale or their favorite Foods.

When you achieve the maximum level of affinity, the maximum amount of heart in the Affection also increases.

Why should I max out the Affinity?

Most players think that getting only 1 cosmetic item for each character is not worth it. But, the point is that a lot of heroes share their cosmetics together.

How to Max Out Affinity Fast:

You can raise Affection by winning a battle with the heroes or having a conversation and presenting gifts. For the full list of all gifts and locations of all characters in The Seven Deadly Sins: Grand Cross, check out our Affection Gifts & Locations guide!

When you increase affection to the maximum, you’ll get a heart and get rewards based on the number of hearts you collect. 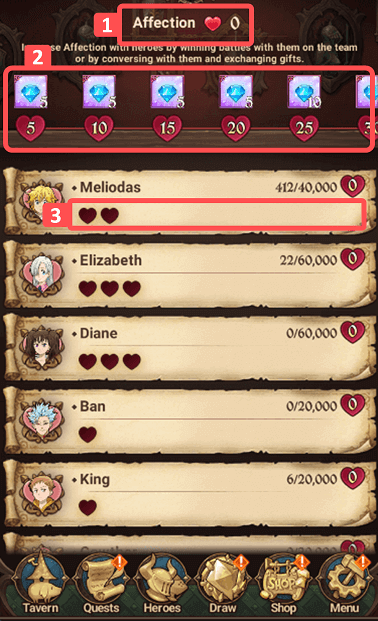 The Affection of a character is shared between different versions of the characters. For example, [Boar Hat] Master Meliodas and [Seven Deadly Sins] Captain Meliodas share the same ‘Meliodas’ affection bar.

How to get more Hearts in Affection:

How to Max Affinity Level Fast 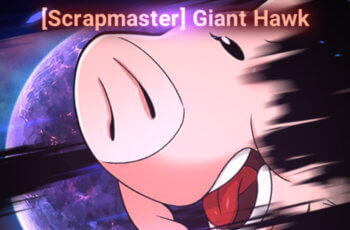 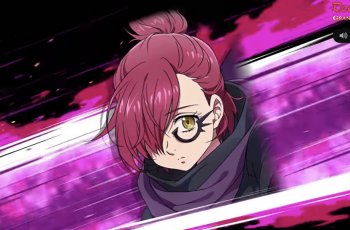 Thank you so much this was so confusing