Here is the complete list of all best The Seven Deadly Sins: Grand Cross Teams for the current game meta.

The teams will be divided into 4 main categories, which are PvE, PvP, Death Match (Boss Battle) and Training Cave. 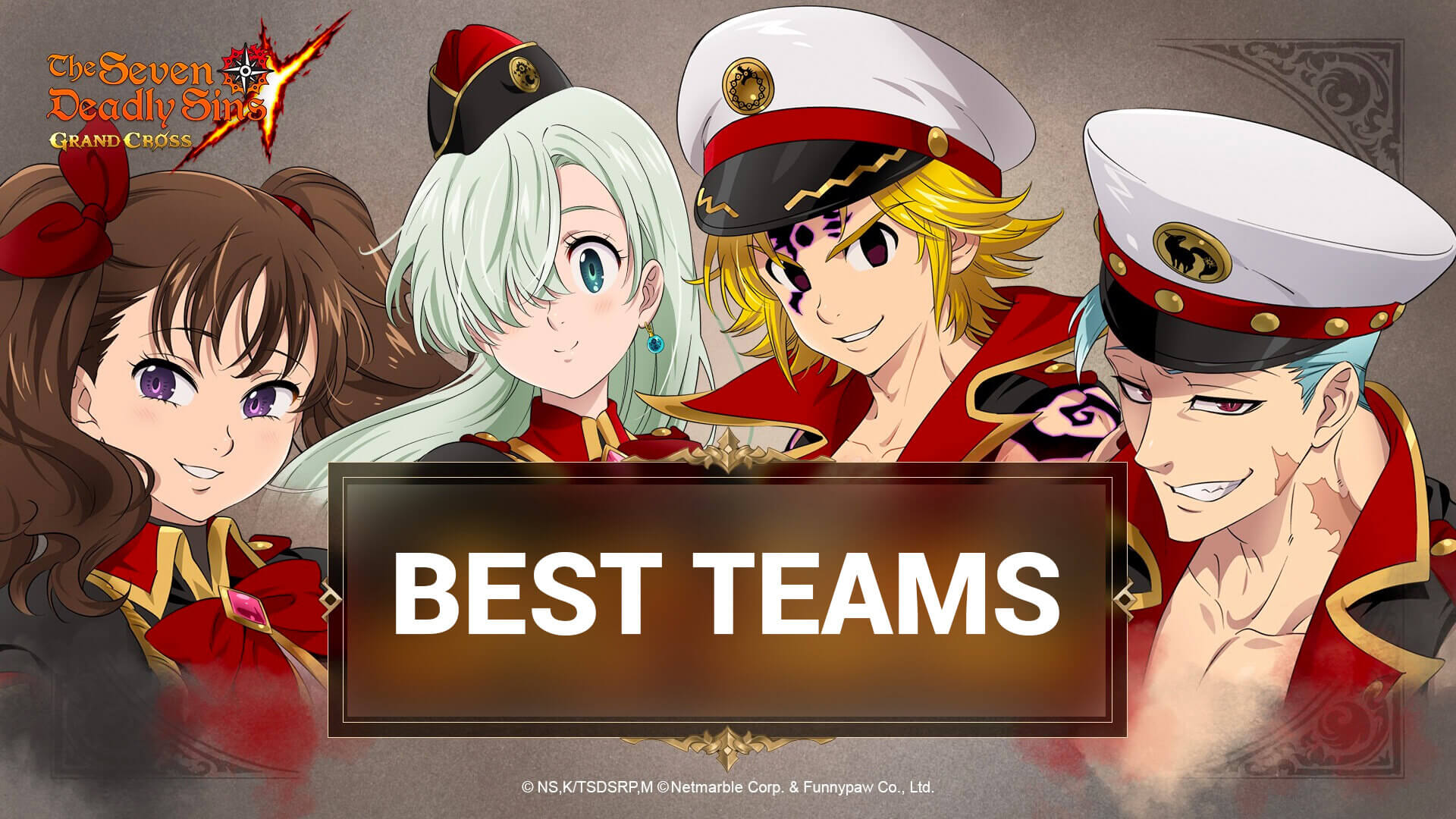 The moment that you’ve been waiting is finally here: Seven Deadly Sins: Grand Cross is now available worldwide in both Google Playstore and Apple Store. Seven Deadly Sins: Grand Cross is a well-known anime in North America thanks to Netflix, and it is also very famous in Japan, where the film was made. And now, thanks to Netmarble, we get the chance to experience the adventures of the main character in the game, whose name is Meliodas.

Seven Deadly Sins: Grand Cross recreate the first two seasons of the anime, but it does have some brand new exclusive storylines in the game. This game not only has excellent 3D graphics, but it also comes with more than 100 cut scenes. By having the main character’s voice lines play by the same Japanese voice actors, and not like many other mobile games, you can actually move around in the world as Meliodas. Interacting with other people at the Boar Hat Tavern like serving food and drink, or cleaning up after people leave. We can see that the dev does its best to remain the authentic. 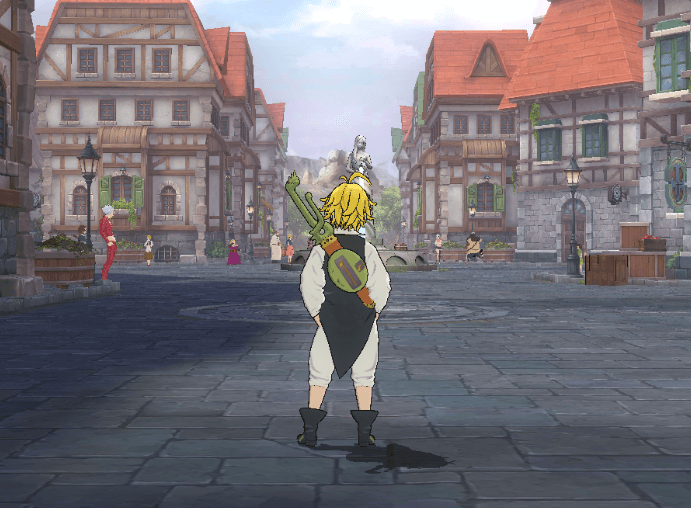 A Village in The Seven Deadly Sins: Grand Cross Game

If you are not familiar with the anime, Seven Deadly Sins is a story about Meliodas and six other characters who represent the seven deadly sins. They were all framed for killing the Great Holy Knight, and they all disband and hide. After sometimes, they start to group back to bring down a corrupt kingdom. This fight will not be easy because Holy Knights and people from the kingdom will do everything to stop them.

What are the Best The Seven Deadly Sins: Grand Cross Teams?

About the combat and team building, the main aspect of the game, you control a group of four Heroes, three of them are the main characters, and the fourth is a backup character in case one of three main characters fall.

Each character has three cards: attack, debuff, and stance. At the start of your turn, you will have seven cards out of nine. You can combine two of the same card type next to each other into a 2-star card, which makes a powerful action. A powerful Ultimate move can be created with a combination of multiple stars cards. While most normal Stages consist of three characters, there is Boss Stage that you can use six characters to fight against.

It’s all about having the best teams in 7DS:GC.

You will have a new teammate as progressing through the story. Most of them are at R or SR tier. Except for Elizabeth, she is an SSR character tier. The next tier is SSR. You can get these characters by opening chests with gem, which you can get through daily/main missions or login reward. You can also easily check which one is great via SDSGC Tier List we gave you above.

One bonus thing is this game does have a very nice feature about pulling characters. Every time you do an 11x pull, if there is no SSR tier character, there is a bar that will fill up by 10%, and once it is full 100%, you will definitely get an SSR tier character.

The highest tier in the game is UR, right after the SSR tier. You can upgrade a character skills by using tokens, which can be gained after battles. Hero’s level can be improved by using enhanced potions. You can equip different outfits, weapon skins, or hairstyles to heroes. This will allow players to customize character looks or optimize power in battles.

Since it is now available worldwide, there will someone who will co-op in events or compete in PVP matches. There will be many upcoming updates, such as events where the player can get higher tier Heroes or items.

There are lots of people who expect to play the game, more than 2 million players had pre-registered for the game. As for the reward, these players will receive:

If you are a fan of this anime or want to try the unique card battle mechanics, don’t hesitate to download it on Android and iOS stores. It is definitely worth a try!

Start today and build your own The Seven Deadly Sins: Grand Cross Team! 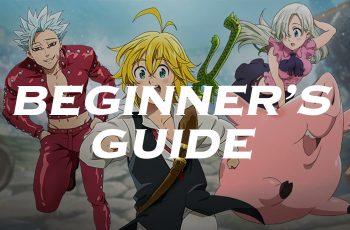 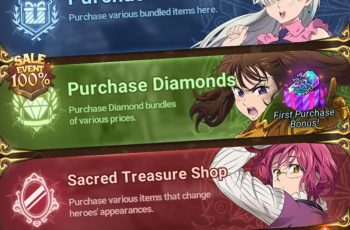 hey do you have any team for shin

Please add links for every hero icon that takes you to a page with the hero description! Would really help

Thank you a lot Tony! I am currently working on it right now!

Hey, realised guild boss teams should be updated. You get more pts with HP team (jillian).

Thank you a lot Dario!

Do you have something for scrap master hawk on event boss battle? Thanks in advance.

Hey, great article txs!! I started the game like a week back n its quite good (f2p). It will be great to have some more good or decent chars as options for every section, specially for beginners (the f2p team is ok, but i already have some ssr and i will love to know if they are good for the content). As of now my main team is (i use for most content): Lizahawk sr green (main) Gilthunder sr green Helbram ssr green Griamore sr red (sub) Im at 75k pow with it, but as content is more challenging i… Read more »

Both Escanor and Slater are so good. Keep us updated with your game progress!

Yes, i got green and red escanor, slater and green e&h at 70! 110k power in main team 🙂 For pvp i use a very basic full attack team (Red esca, green sr e&h and blue slater), it works wonders as they tend to ignore elihawk and she does tons of dmg as her ulti is 1k+ % (maxed), 1 hits any opponent as of now (on gold tier pvp). For pve depends on content, i use as well green esca and green eli for heals (knighthood boss). For red DM i use Slater, red escanor and Gustav (i tried… Read more »

i got a low spec laptop intel i3 2.3 ghz intel hd graphics, what settings should i set on my bluestacks/

Hi, are these replacements just alternatives?
or should i replace these chars for improve the setup?
for example i use Best PvE Farming Team.
and if the replacement is an improvement. is there a calculation when? same tier of medal is better or is a relpaced low rank tier allready better than a higher tier not replaced medal?

Sorry I don’t really understand your comments! The alternatives are replacements in case you don’t have the main heroes.

Hm
I thought I explained it very well. What if I have all zhe heroes required. The one mentioned and all replacements.

I stay with the team listed above?

For example playing with ban (green) instead of Elizabeth

It’s recommended to use the default teams above!

I’ve found for PvP, Blue Arthur, Escanor, Red Merlin and Green Meliodas works quite well, I use 10% combat class food and hopefully move first, then use all the escanor attacks on one person to get a quick kill and ultimate, not to mention Merlin’s freeze ability acts great for CC and a damage amp whilst Arthur’s detonate attack has come in clutch for wiping people with ult

Blue Arthur? Hmmm very interesting! I gotta try this one for sure and will let you know how it’s going!

I am considering to use the escanor rush team, but i just cant figure out what is the point of having Blue King on the team?

He is just one of the Meta Heroes, so….

We are working on it!

escanor + arthur + galand and simon -> best attacking team. This team is counter for kingbrum if galand marks any of the fairy

Great one! I love it!

Hey there. I can’t find a good team to farm Boss Battle in Chapter 6 (Henrickson, Vivian, Gustav and Dreyfus) on Auto. Some advice?

Here are some good teams for you, assuming that most people have these heroes at high level:

so why sr green gilthunder as sub for best pve team? is not not better to have him as the synergy with howzer and new king arthur as reserve?

It’s due to his damage buff in some special cases. You can do that as well, doesn’t hurt at all!

For the above cards, do i need that exact quality or is higher = better?

The higher, the better 😀

Hi, thanks for that overview. what i still dont understand and isnt described here is:
do i need the exact charackter for that setup to work? i mean same rarity? or is higher = better?
thanks greetings Shoninya

What about the green book farming? and does Blue Guila can work well in AOE farming? she has nice AOE and heal as well to sustain the team?
Thanks for the guides

Green book is quite easy to farm. If you are having struggle with it, I will post some teams for this above!

Guila is decent but not the best.

Hello, i’m not struggling with green book but what is the fastest team to do it?

Have Howzer (R), Gowther (R) in your team and you will be good!

And where/how do you grind green books? im missing them,

Where? In the SP Dungeon of course, during Half Stamina Event!

If you are finding it hard to farm Green Books, use Howzer (R), Gowther (R) in your team and you will be fine!

My actual problem is that i have plenty tier 3-5 books but i cant find tier 2 books. where are these?

You can downgrade higher rank books in the Boar Hat, interact with King.

Go to king in the tavern and trade 3* books down to 2*. Each 3* book converts into 2x 2* books, the same applies to reducing any books with king. Better trading down than farming the low tiers and wasting stamina

“CC” is Crowd Control. It includes every ability that prevents the enemy from taking action. Most commonly thats freezes, stuns and petrification for a hard CC and block ultimate, block attack etc. for a soft CC, which is only preventing a part of the enemies skillset.